This Week in Illness, March 5

This Week in Illness, March 5 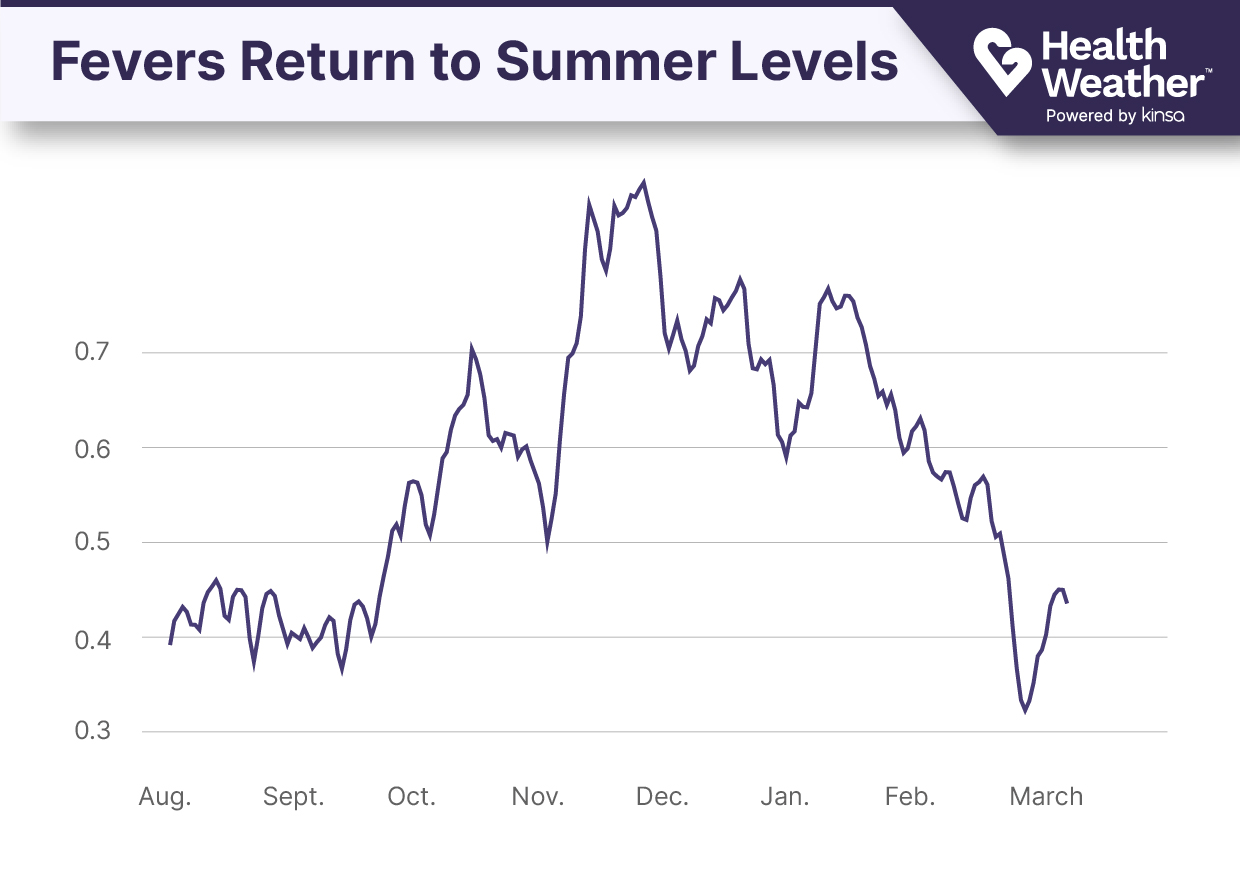 This week in illness, some states are starting to relax public health measures, including Texas Governor Greg Abbott announcing this week the state will be 100% open, and the mask mandate removed, as early as next week.  Kinsa data signals show this move may be premature, as influenza-like illness (ILI) is starting to rebound and symptoms and fevers are starting to rise. However, the nation continues to make great strides in both vaccination availability and rates. President Biden also announced this week that the U.S. will have enough vaccines for every adult who wants one by the end of May. Here’s what else is happening:

After two weeks of steep declines in case numbers, the rate of the fall has shrunk by about half. There’s still a decrease, but now it’s around 19% fewer cases compared to 44% from the last two weeks. Nationally, cases are around the levels seen during the summer peak, however many states are trending sideways, a few are increasing and hospitalizations have decreased every day since January 8.

New Jersey and Minnesota have been registering higher fever levels this week, according to Kinsa’s network of smart thermometers. Many of these have lasted at least 72 hours, indicating they are likely not side effects from vaccinations. The rate of transmission in the areas has also been higher than expected and reported COVID cases have been increasing or staying the same for most of the week.

Some States Begin To Reopen

Following rapid case decreases in the first two months of the year, Texas announced it will end its mask mandate and allow businesses to reopen to 100 percent. Alabama, Mississippi, Montana and Iowa have also followed suit with plans to end their mask mandates. Especially given the CDC’s new report on the impact of mask mandates and restaurant dining policies on COVID cases, Kinsa will be watching our data closely in these areas.

Despite their reopening plans, Houston is the first US city to find every concerning variant in its population, including the much-feared P1 variant that was first detected in Brazil. P1 has also been found in Alaska, Florida, Maryland, Minnesota, New Jersey, Oklahoma and Oregon. This variant is particularly worrisome because early evidence suggests it can re-infect people who have previously been ill.

The country hit about 16% of the population having at least one shot. The new Johnson & Johnson one-shot vaccine began to slowly roll out to many states this week after receiving emergency use authorization approval last weekend from the FDA. Detroit's mayor rejected their batch saying his city should "get the best."

If you’re wondering how this new vaccine compares to the Moderna and Pfizer you can check out this guide. New Mexico, South Dakota, Connecticut, North Dakota and Rhode Island are leading the lower-50 states with the highest percentage of their population vaccinated. The newest guidance from the federal government says we should have enough vaccines for every adult by the end of May.

As more people receive vaccines, when and how we return to normal has been an intense topic of conversation. There’s still a lot we need to learn, but one thing is certain for now: even if you’ve been vaccinated, you need to continue to wear a mask to protect others.

A new Secretary of Education was confirmed this week and he laid out plans to get the country safely back to in-person learning in an op-ed for USA Today. California Governor Gavin Newsom revealed a plan to reopen schools for some by the end of the month.

Flu continues to hover at historic lows as we move into the last month of traditional flu season. The CDC reports low counts across every state and only 33 positive flu tests for the week ending February 27 compared to around 12,000 in the same week of 2020. We will be watching to see how the loosening of restrictions and mask mandates affects these numbers going forward.